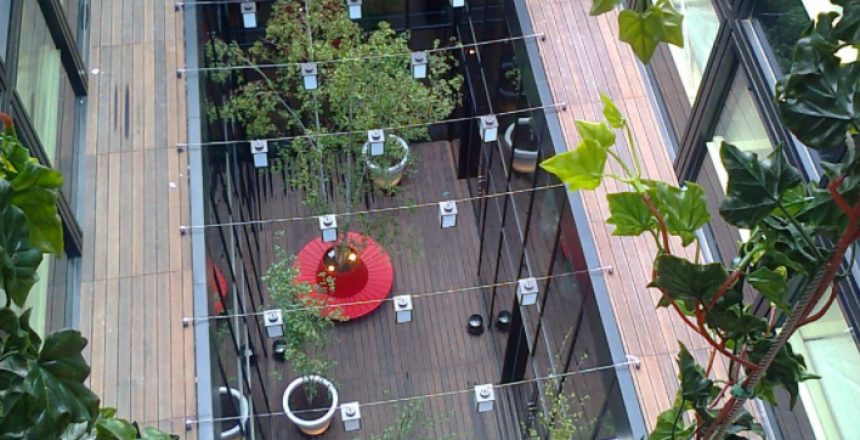 The  urban heat island, commonly known as UHI was first identified in 1810 by a man named Luke Howard. It describes an urban area that has a higher temperature than the rural areas that surround it. This temperature difference is usually felt more during the night, when the wind is lower, and is more noticeable during the winter and summer months. Commonly is an area that is densely inhabited.

What causes an Urban Heat Island to develop?

There are a number of reasons why the UHI develops but we have selected three of the mosts common.

One of these is that the dark surfaces of the roads and buildings in built up areas will absorb more heat from the sun. This is due the levels of concrete and asphalt and their own thermal properties.

Another cause of the urban heat island effect is the lack of vegetation that is found in urban areas. Not only does this mean higher levels of carbon dioxide in the air, but with no trees comes a lack of shade protecting the city from the rays of the sun. Early inner city developments which did not include the use of green roofs, plants, shrubs or planters clearly carry some responsibility for the effect.

Thirdly, scientists say that the high levels of pollution found in urban areas can also lead to increased temperatures. In turn this creates a blanket above the city which stops the heat from escaping. Unfortunately, as the temperate rises the concentration of the ozone layer and the production of those greenhouse gases also increase, which leads to a cycle being created.

Is there anything that can be done to combat an Urban Heat Island?

This is where Aztec Plants amongst others have contributing to alleviating or stopping the development of the UHI is by the use of green roofs.

Green roofs are when carefully selected vegetation, plants and flowers are planted onto a city roof space, creating a beautiful spot of green amongst the city buildings. Not only does this look great, but it helps to purify the air and reduce the likelihood of an urban heat island from developing. As the UHI has become more recognised with its effect on human behaviour, architects and planners are now more consistently paying much closer attention to an environment and how it can be improved. You can read more here web page link

There are other ways that effect can be reduced; Using lighter coloured building materials which reflect the heat from the sun, rather than absorbing it, thereby helping to cool the area. But it’s a real issue that affects people, and has been behind the rise of soft landscaping  and the use of planters in major development contracts. Aztec are proud to be helping architects and specifiers nationally to combat this issue.